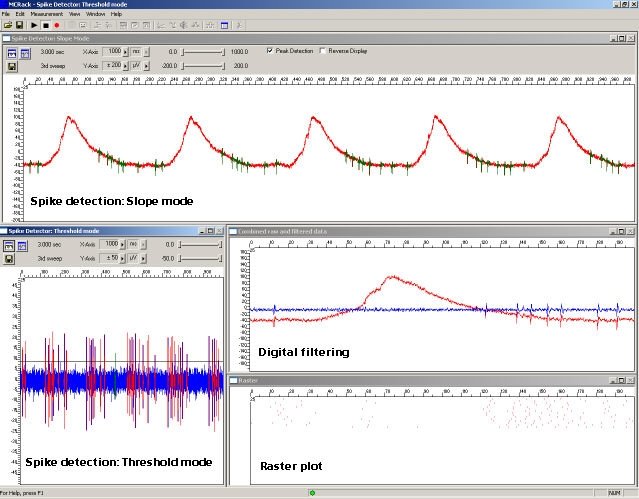 The retina is a peripheral, easily accessible part of the central nervous system. Stimulation with light pulses results in a complex signalling by neurons within the layers of the retina. The retinal ganglion cells transmit retinal information to higher visual centers in the brain via their axons that form the optic nerve. Retinal function can be affected by acute injuries, intoxications, or retinal diseases, either inherited or acquired, resulting in visual impairment or even blindness.

The electroretinogram (ERG) is an extracellular field potential generated by the cells in the retina. So-called microERGs can be recorded with the MEA System from retina explants, for example, from rat or chicken. For the recording of light-evoked activity, a retinal segment with the pigment epithelium, is placed ganglion cell site down on an MEA. Local ERGs (microERGs) with the typical components and ganglion cell spikes can be recorded with appropriate filter settings with the MEA System. The prominent components of the microERG can be pharmacologically identified.

This in vitro retina sensor can be used for assessing effects of pharmacological compounds and putative therapeutics, drug side effects, and consequences of degeneration-related processes on retinal signalling.

The demo data  was kindly provided by the NMI Reutlingen, Germany.

Spiking activity is visible in the ERG traces as well and can be easily extracted from the underlying field potential with the Spike Sorter in Slope mode.

Alternatively, the field potentials can be removed by a digital 300 Hz High Pass filter, and spikes can be detected by setting a threshold. This sample rack demonstrates both methods, and the spike sorting feature.

The demo data was kindly provided by the NMI Reutlingen, Germany.

In the downloadable tutorial, you will set up an offline analysis rack (for the demo data file) step by step. You can set up a virtual rack for online recordings and analysis likewise, simply add the MC_Card as the data source to the rack instead of the Replayer.