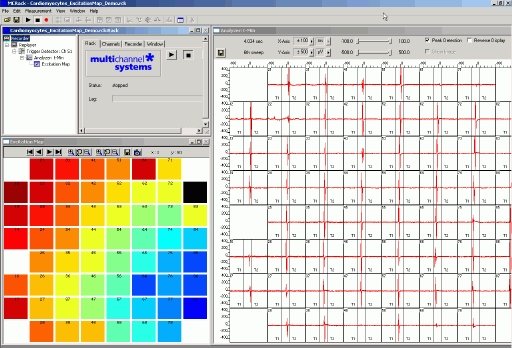 The MEA system can be used for in vitro studies of the electrical properties of cardiac myocytes and, for example, effects of drug candidates on field potential waveforms and kinetics.

Primary cardiac myocytes can be easily harvested from fertilized chicken eggs, or from neonatal rat or mouse. It is also possible to obtain murine and human embryonic stem cells derived from embryoid bodies. There is also one cardiomyocyte cell line from mouse that retains a differentiated cardiac myocyte phenotype: HL-1 from Dr. W. Claycomb.

Plated cells form a syncytium and start beating spontaneously after a couple of days, or contract after electrical stimulation (pacing). The two-dimensional MEA layout is ideally suited for showing the waveform propagation and measuring the conduction velocity in a cardiomyocyte culture.

Simultaneous recordings of action potentials (with intracellular electrodes) and field potentials (with extracellular electrodes) have shown that there is a correlation between the rise time of the cardiac action potential (AP) and field potential (FP) as well as between AP and FP duration. A correlation between the waveform components and the ion channel activities was shown by using ion channel blockers or by depleting the medium of the respective ions.

The high and short peak of the extracellular field potential can be correlated to the rapid component of the depolarizing sodium current. The following plateau follows the time course of the slow calcium current; and the following positive or negative peak correlates to the slow rectifying K+ current (IKr). The polarity of this peak depends on several parameters, for example, the proximity of the cell layer to the measuring electrode, and cannot be predicted, but this fact does generally not matter for this assay.

You will see in the tutorial how a virtual rack is set up for those purposes, and how typical signal waveforms look like.