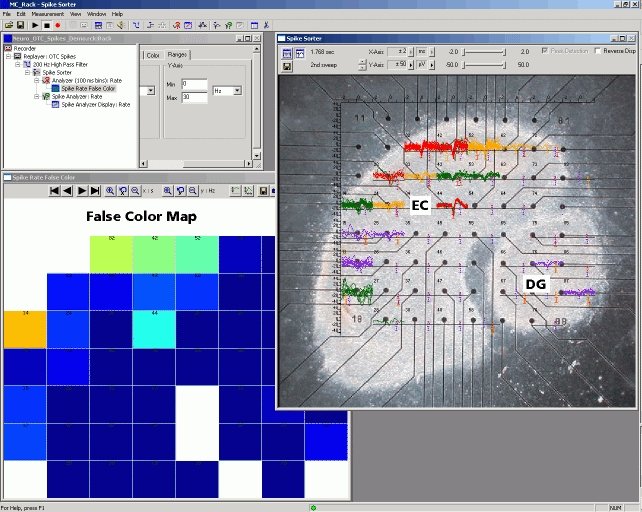 Organotypic slices of the dendate gyrus (DG) and the entorhinal cortex (EC) taken from a PND 6 rat were co-cultured on MEAs for seven days. Both subregions showed an independent spontaneous spike activity.

In an acute experiment, the slice (generally from adult animals) is used directly after preparation and discarded after the experiment. Slices from neonatal animals can also be kept in prolonged culture, over several weeks or even months, as so called organotypic cultures (OTC). Even though the synaptic organization is not exactly the same as in native tissue, the main characteristics and functions are preserved. OTCs have the advantage that they allow to observe the electrophysiological activity over a longer period of time on the same slice. Also, organotypic slices tend to thin out on the MEA, which is advantageous for optical imaging. OTC experiments are especially useful for longterm experiments, for example, for monitoring the development of the neuronal networks and its electrophysiological activity, the behavior of co-cultured slices from different regions and the regeneration of tissue (like in this experiment), or longterm drug effects.

In the downloadable tutorial chapter, you will set up an offline analysis rack (for the demo data file) step by step. You can set up a virtual rack for online recordings and analysis likewise, simply add the MC_Card as the data source to the rack instead of the Replayer.